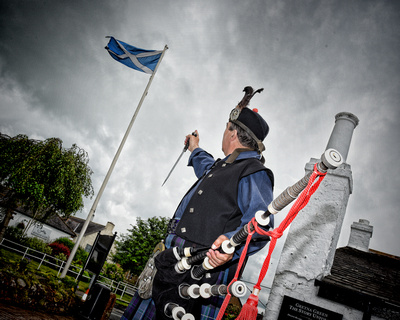 Daggers and knives have been part of civilian wear and military dress since the first knives were crafted from stone. A few cultures throughout history, though, have taken this utilitarian tool and really turned it into an item of great cultural significance. The dirk, as developed by the Scots, is one of these weapons

The Scots of the Middle Ages and renaissance spent much of their time in conflict whether warring with England for independence or fighting with other clans for local dominance. As such, the Scots were known to go through their daily lives fully or nearly fully armed, more so than other Europeans of the time. A quote by John Hume perfectly illustrates this: "Thy [the Highlanders] always appeared like warriors; as if their arms [weapons] had been limbs and members of their bodies they were never seen without them; they traveled, they attended fairs and markets, nay they went to church with their broadswords and dirks."

Dirks were effective weapons in war as well as a useful tool for everyday tasks, including eating. They were also more affordable than a sword. Taking these things into account, it is easy to see why it was hard to find a Highlander without such a weapon.

What is a dirk? At its most basic a dirk can be defined as a "long dagger with a straight blade." This loose definition of course encompasses many different kinds of knives; in fact, most daggers will fit within this definition. The Scottish dirk, though, has unique features that set it apart from other straight-bladed sidearms.

The Scottish dirk is a direct descendant of the medieval ballock dagger. Looking at the late stylized versions of the dirk, it may be difficult to see a relation to its earlier cousin. The early versions, though, show its lineage more clearly.

agen joker123(non-registered)
I got what you mean, appreciate it for putting up. Woh I am lucky to find this website through google.
成人英語(non-registered)
I loved as much as you’ll receive carried out right here. The sketch is tasteful, your authored subject matter stylish. nonetheless, you command get bought an shakiness over that you wish be delivering the following. unwell unquestionably come more formerly again since exactly the same nearly very often inside case you shield this increase.
pcb assembly(non-registered)
you have got a excellent weblog here! want to develop invite posts on my weblog?
Slot pragmatic(non-registered)
You made some good points there. I did a search on the topic and found most people will agree with your blog.
เล่นบาคาร่า(non-registered)
This article was written by a real thinking writer✅. I agree many of the with the solid points made by the writer of
No comments posted.
Loading...
Subscribe
RSS
Recent Posts
Our wedding day at The Mill Forge The World Famous Blacksmiths Gretna Green from the air Scottish Piper Alan Marshall with his Dirk Handfasting or tying the knot Caerlaverock Castle from the air A selfie at your wedding Why did you choose Gretna Green New web site is live Welcome
Keywords
weddings green gretna anvil handfasting knot the tying piper budget
Archive
January February March April May June July August September October November December
Colin Carpenter Photography
Powered by ZENFOLIO User Agreement
Cancel
Continue